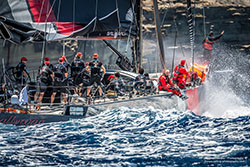 The 2019 Antigua Bermuda Race entered a new phase on the second night (Thursday 9th May) of the 935 mile race to Bermuda. The international fleet encountered a pressure ridge over a thousand miles wide, right across the race course. Race leader, Supermaxi SHK Scallywag (HKG) came to a grinding halt and watched the rest of the fleet close the gap until they too lost the breeze. Scallywag's tactic of sailing almost 175 miles west of the rhumb line looked to work in their favour as the easterly going ocean current did at least work in their favour. However, during the night, it was snakes and ladders as one boat after another lost or gained in the patchy breeze. Behind the leader, teams are still using their own strategies to maximise performance and get through the light air and make it to the fresh breeze north.

At 1400 AST on Day Three, SKH Scallywag was back in the breeze, making 15 knots of boat speed, with 400 miles to go to the finish. Afansay Isaev Maxi Weddell (RUS) was approximately 100 miles behind the leader. The chasing pack were enjoying tight racing with only 18 miles of separation between the next five boats: Esprit de Corps IV (CAN), Pata Negra (GBR), Maremosso (GER), Challenger (CAN), Raucous (SUI).

Blast reaching in the tropics is hard to better, and for the first day and night of the 2019 Antigua Bermuda Race, the international fleet have had their fill. However, Mother Nature is about to deliver a speed bump that will bring a tactical and skilful element to the 935 nautical mile oceanic race to Bermuda.

All yachts in the race have been eating up the miles in solid trade winds. Supermaxi SHK Scallywag (HKG), skippered by Australian David Witt, is set for a 24 hour run of over 400 nm, within striking distance of race record pace. Miles Seddon, British navigator on SHK Scallywag checked in just before dusk on the first night: “We are just passing Anguilla, leaving the Caribbean behind. Top speed so far has been 26.5 knots.”

Over the next 24 hours, the fleet are set to finish their thrilling trade winds ride as they encounter an occluded front across their path to Bermuda. Cold air from a mature low pressure system further north is overtaking the warm trade winds. The overall effect is a trough, or pressure ridge in which the fleet is likely to encounter light head winds. However, the mixture of cold and warm air can also cause localised squalls giving sudden significant wind shifts in both direction and speed.

Start of the 2019 Antigua Bermuda Race

The 2019 Antigua Bermuda Race fleet set off on Wednesday 8th May off Fort Charlotte, Antigua. A perfect start saw brilliant sunshine and 20 knots trade winds combining to produce spectacular conditions for the international fleet. Close to a hundred sailors from Australia, Canada, France, Germany, Great Britain, Hong Kong, Italy, the Netherlands, Sweden, Switzerland, Russia, and the USA are taking part in the 935nm offshore race from Antigua to Bermuda.

A highly competitive start featured a yachts hugging the rugged coastline of south Antigua, making gains from the lifting pressure rolling down the cliffs. The 100ft canting keel flyer SHK Scallywag (HKG) got away to a cracking start, as did Gilles Barbot's Volvo 60 Esprit de Corps IV (CAN). At Green Island the fleet eased sheets, hoisting downwind sails and accelerating into a power reach that should last for at over 300 miles. According to weather forecasts, they are in for a spectacular treat of superb sailing on a beam reach in tropical heat, surfing through the Atlantic Ocean.