After consultation with both the Governments of Antigua & Barbuda and Bermuda over the COVID-19 pandemic, we regret to announce the 2020 Antigua Bermuda Race has been cancelled.

The Royal Bermuda Yacht Club in association with Antigua Sailing Week thank the support of the Bermuda Tourism Authority and Goslings Rum for their help in organizing the race and wish all sailors safe passage home.

The fourth edition of the Antigua Bermuda Race will start from Antigua May 6th 2020. The 935nm oceanic race is managed by the Royal Bermuda Yacht Club in association with Antigua Sailing Week, and supported by the Bermuda Tourism Authority and Goslings Rum. The race is designed to suit a wide range of yachts and crew, with memorable parties both in Antigua and Bermuda.

After leaving Antigua the fleet pass Barbuda and will be out of sight of land until the finish in Bermuda. The race is an experience of about 1,000 miles of tropical Atlantic sailing - a true blue ocean adventure. Sailing in the deep, competitors will experience reaching conditions in warm oceanic swell and a magical night sky.

Canadian Pogo 12.50 Hermes II has raced in all previous editions of the Antigua Bermuda Race and co-skipper Meg Reilly confirms that the team will be back for their fourth race, having come third in class last year.

"Every year I look forward to the Antigua Bermuda Race and I think Hermes does too," smiled Meg Reilly. "She gets to stretch out her legs and surf some real ocean waves.

“This was just a fabulous race, Scallywag was in a world of its own but all the rest of the IRC fleet finished with 24 hours of each other on a 1000 mile course. There was really tight competition for the overall win, and second place was won by just 21 minutes,” commented Les Crane. “Stories, friendships and opportunities have come about because of this race, which makes it even more special. Many competitors have told us they will be back next year, and we hope to have more teams joining us in the IRC Racing, Double Handed and CSA Cruising classes.”

The fourth edition of the Antigua Bermuda Race will start from Antigua May 6th, 2020. 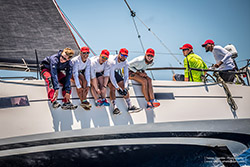 “Only one member of the crew was over 25, and we came together after Antigua Sailing Week,” commented Pata Negra's skipper Andy Liss. “Some of the crew will help me deliver Pata Negra to Newport for the Transatlantic Race, and others will be sailing boats across the Atlantic in the ARC, and private deliveries. The crew for this race are a great bunch, and we have become firm friends. We are delighted to continue the winning tradition for Pata Negra.”

“Everybody has been just awesome on the race, it's a small boat for six days on the water but we just get along great, we had fun all the way!” commented Xpatriate's Peter Grueterich. “I knew it was very very tight between us and Rye, and it was an excruciating finish as it seemed so long get there. When we heard from Les Crane that we had got second, I was completely floored, there was an outburst of joy from the whole crew. This has been an incredible race, with great organisation. The whole idea of a race to finish the Caribbean season is just perfect, after clearing customs in St.Georges we had a party until 4 am with other competitors. We look forward to telling our stories in the Yard Arm Bar at the Riverside Yacht Club.”