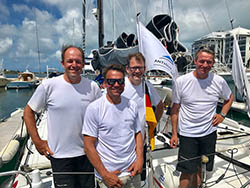 On the fifth day of the 2018 Antigua Bermuda Race, the vast majority of the international fleet had safely arrived in Bermuda. After passing St.David's Lighthouse, the yachts make their way through The Cut to St. George's Harbor, clear customs at Ordnance Island and go on to the Royal Bermuda Yacht Club in Hamilton, where a warm welcome was well received by the competing yachts that have finished the race.

Arnt Bruhns German Class40 Iskareen finished the race, on Monday 13th May, after over five days at sea. The crew of four will be racing in the Atlantic Anniversary Regatta (AAR) from Bermuda to Hamburg this July: “We covered over 260 miles in the first 24 hours and averaged over 10 knots for the first 48 hours, so really good, fast running conditions,” said Bruhns. “With a team of four we could push the boat quite hard and it was also a lot of fun on board. When the wind went light and to the south we did have a few hours with just the main sail up, going very slowly, but when the wind picked up we managed to time our gybe just right and managed to slip in. Iskareen is pretty much custom-built for ocean racing off the wind, so she is fast and comfortable. It is a family tradition to participate in the Atlantic races to Hamburg - this has been a great race and perfect preparation for the AAR.”

Louis Goor's Irish Oyster 575 Irene III finished the race on Monday morning after just under five days at sea. The team are mostly from Wicklow, Ireland. “This is a great race for the boat. Irene III is made for reaching in the ocean and we have had a marvellous time on board,” smiled Goor. “Whilst some of the teams racing have been eating astronaut food, we have had enjoyed superb food as two of the crew are excellent chefs, and the Bordeaux on board was superb! This is a wonderful way to sail to Bermuda. My father will be taking her back across the Atlantic to our home port of Majorca and for us this is a two-year cycle. We would love to compete again in 2020.

Juan Grunwaldt's Uruguayan Bavaria 56 Caliope arrived in the early hours of Tuesday 15th May, much to the delight of the owner who was returning to Bermuda for the first time in nearly 40 years: “I sailed here as a young man from South America in 1979 and Bermuda looks very different today with all of the fine new buildings. I am going to take plenty of pictures and send them to the crew I sailed with back then,” exclaimed Grunwaldt. “We have really enjoyed the race. From Antigua for the first few days we had beautiful conditions and we were very comfortable on board.” 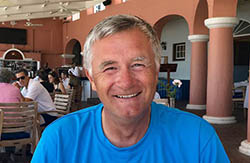 Giles Redpath's Lombard 46 Pata Negra, skippered by Ollie Heer finished the race at dawn on Tuesday 15th May. He was celebrating his 30th birthday during the race. “Originally, I was going to sail Pata Negra two-handed from Antigua to Newport with Gareth Glover. However, I asked some of my friends from Switzerland if they would like to fly out to Antigua and race to Bermuda and they all said yes! Gareth is a highly experienced sailor but his friends have never sailed offshore before. A few of them were sea sick at the start but that didn't last long. This race is a fantastic way to introduce people to offshore sailing and several of my friends have been converted to sailing. We opened a bottle of champagne on my birthday and what a great place to celebrate it.”

Hanns Ostmeier was racing his German Swan 45 High Yield in the Antigua Bermuda Race. Hanns was enjoying a glass of Pinot Grigio and a seafood salad on the terrace of the Royal Bermuda Yacht Club with a panoramic view of Hamilton Harbour: “This brings back great memories for me,” smiled Ostmeier. “In 2014 we won our class in the Newport Bermuda Race and we celebrated at the Royal Bermuda Yacht Club. This is the first time I have returned since then and it has been great to race here. Bermuda is a wonderful place, it has a great atmosphere and beautiful ocean all around it.” 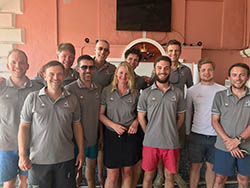 The young crew racing the German JV52 Haspa Hamburg were enjoying a cold beer after five and a half days at sea. The yacht is owned by the Hamburgischer Verein Seefahrt (HVS) based in Hamburg and for nearly 100 years, the association has given young sailors the chance to experience offshore racing. As you can see by the above picture, they seemed to have multiplied at the bar of the Royal Bermuda Yacht Club!

All of the remaining yachts racing in the 2018 Antigua Bermuda Race are expected to arrive in Bermuda by Wednesday 16th May.